The year 2020 has been rife with leaks and confirmations of UFO activity in our skies. From the Pentagon declassifying the so-called “Tic Tac” UFO video, President Trump chiming in on the impressiveness of these UFO videos, and Navy officials claiming that these UFOs committed acts of war, there has been no shortage of UFO news this year. Last week, an Israeli defense official made the bold claim that aliens have a “galactic federation,” have made pacts with the U.S. government, are experimenting on humans, and occupy secret underground bases on Mars – and he also claimed that Trump is well aware of all of this. 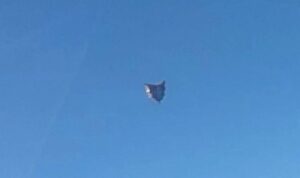 The photo of the cube UFO was allegedly snapped by the pilot of the fighter jet back in 2018 over the Atlantic Ocean, somewhere off the East Coast. The released photo was taken on his cell phone, and shows an unusual-looking object. It’s clearly metallic, silver in color, reflecting the sunlight. U.S. officials called it “cube-shaped,” but it more closely resembles and upside-down bell shape, with pointed protrusions sticking out from its sides. It’s probably safe to assume that the co-pilot snapped some pics or video of the object with the planes camera system, as well, though those images did not seem to appear in the intelligence report.

Some have speculated that this was a GPS dropsonde – a sensor attached to a parachute that provides critical storm and weather information. But it was noted that the actual dropsonde is not in this photo, and if this was merely the parachute, it’s a very strange-looking parachute. Additionally, an aircraft would have had to have been in the area to drop the sensor, and the presence of another craft should have been noted by the fighter pilots in their report. Lastly, the pilots noted that the object remained stationary, not falling, and not being carried by wind currents. Once again, we have a fancy weather balloon theory in an attempt to explain away a UFO.

So what is this object? It’s odd, to say the least. It doesn’t look like any aircraft known to exist, yet it’s pretty obviously metallic, a physical object. There’s no information on the movement of the object – did it make impossible aerial maneuvers, did it speed off faster than humans can currently travel, etc. – just that it appeared not to be moving on air currents. It’s possible that it’s a parachute or weather balloon, but people familiar with those in use don’t seem to recognize this object. So, in a very real sense, it remains :unidentified. That doesn’t mean it’s an extraterrestrial craft. But it does add fuel to the speculation that the government knows these things exist, yet doesn’t fully know what they are.