On the Trail of UFOs – Review 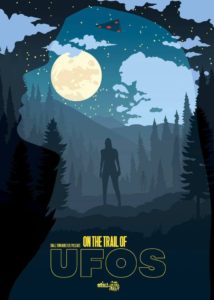 On the Trail of UFOs is not your traditional UFO documentary series. And that’s a very good thing.

The latest offering from Small Town Monsters has the crew casting their gaze upwards this time, scanning the skies for potential visitors from afar, rather than searching for the usual beasties from small town America. While their typical subjects tend to be Bigfoot-like creatures, lake monsters, and other more terrestrial beings, they have dabbled a little bit with possible otherworldly creatures, namely Mothman and the Flatwoods monster. And while both of those entities seem to have a UFO connection, this series focuses on the actual lights and objects in the skies. It’s an interesting departure for the Small Town Monsters team, but a logical one. It’s difficult to investigate some of the cryptids they’ve featured in the past without some extraterrestrial crossover, and no matter your views on Bigfoot or other unknown creatures, you can’t research them for too long before noticing a correlation to other paranormal phenomena that seem to be occurring alongside them.

Much like their previous docuseries On the Trail of Bigfoot, this 8-episode series examines the subject matter through a wider lens, with a broader scope, yet in smaller pieces. Each episode has an overarching theme, but this is far from a chronological history of the UFO phenomenon. Some more well-known cases are revisited multiple times over the course of the series, while others are just mentioned once, with lots of new or little-known stories sprinkled in as well. As the On the Trail of… moniker implies, this is really about a the team’s search for the truth about UFOs, and not an in-depth look at any specific cases or aspects of the field. I’ll give a brief synopsis of each episode, just so you know what to expect, followed by my overall thoughts.

Episode 1 “UFO People” – We meet our host/narrator/guide for the series, Shannon LeGro, host of the Into the Fray podcast, as she embarks on a year-long adventure with the Small Town Monsters crew to explore the UFO mystery. This episode serves as a quick refresher course on UFOs, or UAPs (Unidentified Aerial Phenomena) as they are starting to be called these days. Kenneth Arnold and his original sighting of “flying saucers” to the current crop of Navy disclosure videos showing military pilots filming weird aircraft is covered here, a nice little primer for things to come.

Episode 2 “The Changing Face” – This episode examines the different kinds of craft that have been seen throughout the years, and how even the craft that people were reportedly seeing seemed to change with the times: the very steampunk-ish airships of the 18th and 19th centuries; the iconic saucers of the ‘50s and ‘60s; the triangular or V-shape UFOs such as the Phoenix Lights and the objects seen in the Hudson River Valley; the Kecksburg “acorn” UFO; cigar shaped craft; and more. 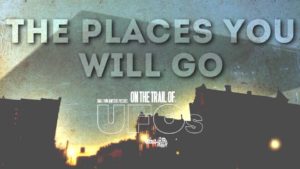 Episode 3 “The Places You Will Go…” – Next up are UFO hotspots and flaps, large, concentrated numbers of sightings by multiple eyewitnesses. Chestnut Ridge is a mainstay in the STM rotation, and the Kecksburg crash from that area is examined, along with interviews with Stan Gordon, the Chestnut Ridge expert, if you will. The Hudson Valley UFO flap from the 1980s is also mentioned, a subject I have a soft spot for as it was one of my first real deep dives into UFO research when I was younger. Plus I travel up through there frequently now on my camping expeditions. It’s an interesting look into why UFOs are often seen in certain places in greater numbers and with greater frequency.

Episode 4 “The Tricksters” – A closer look at what UFOs might actually be, and the eternal debate: are they extraterrestrial in nature or simply advanced military technology? Are these aliens from other planets, trying to save us from ourselves, as the contactee movement from the ‘50s would have us believe? Perhaps the occupants are strange beings visiting from other dimensions? Or are they time travelers, just us from the future?

Episode 5 “The Stuff They Don’t Want You To Know” – UFOs and conspiracy theories go together like chocolate and peanut butter, don’t they? So what is the government hiding from us? The UFO crash at Roswell, secret installations like Wright-Patterson AFB and Area 51 (and the Storm Area 51 movement) are discussed, along with the progenitor of the Area 51 mythos, Bob Lazar.

Episode 6 “Let It Shine” – What if UFOs are something altogether different than what we assume them to be, not something we even understand? Bizarre lights have been seen throughout history, and not always in the sky. People have been reporting smaller orbs of light floating closer to the ground in the woods for centuries. This half-hour examines the Brown Mountain lights in North Carolina, the Marfa lights of Texas, and other spook light legends, and how they may or may not have a connection to UFOs.

Episode 7 “The Taken” – Perhaps the weirdest, scariest, and most controversial aspect of the UFO phenomenon has to be the alleged alien abduction experiences. This installment focuses on the Betty & Barney Hill incident, which to me is still the most fascinating abduction story to date, perhaps because it’s really the original modern abduction tale. The Travis Walton account gets a little airtime here too, another story that makes me wonder, even though I’m not really a big believer in the abduction narrative. It gets weirder with the hybrid hypothesis (i.e., that aliens are mating with their abductees to produce hybrid children), and Whitley Streiber’s account and how abductions may follow family lineage.

Episode 8 “Longer Way To Go” – Where is ufology heading? The last episode in this series asks that very question, while alluding to how social media is as big a help to research as it is a hindrance, with all of its infighting. The various researchers who have been featured throughout the series chime in with their closing thoughts, and a very intriguing video from a witness in Brooklyn, New York is shown, but sadly, just briefly. And just like with UFO research in general, we are left with more questions than answers.

Part historical documentary, part paranormal investigation, On the Trail of UFOs provides a fresh, thoughtful look at the UFO enigma. Shannon LeGro’s calm, measured narration imbues the series with a somber thoughtfulness often missing in similar programs of the genre. The subject of UFOs is truly a mystery – maybe wondrous, potentially frightening, yet ultimately frustrating. We just don’t know, and may never know, who or what they are. And as always, Small Town Monsters conveys those truths unflinchingly. There’s a nice variety of well-known UFO sightings (e.g., the Phoenix lights), the team conducting on-location investigations, and retellings of more individual, personal experiences. Personally, I love the lesser-known accounts, the average citizen who just sees something weird in the sky, experiences some missing time, or encounters small floating balls of light in the woods at night. The stories are sensational enough just as they are, and there is no attempt here to make things more or less than what they are. It’s a hallmark of STM productions and it continues here.

As we’ve come to expect from any STM production, everything about On the Trail of UFOs is slickly executed, from the cinematography to the musical score, and everything in between. Each episode is a tight, perfectly-paced half-hour (more or less) of witness testimony, researcher interviews, historical footage, and visual recreations of experiences and sightings. Many different perspectives are afforded their time, so there’s a healthy mix of skepticism, logic, conspiracy theories, and truly out-there suppositions, all handled with due respect and reverence. Many of the cinematic shots are breathtaking, and made all the more amazing considering this is not a cable or Hollywood crew with a budget of millions of dollars. The musical score is subtle and non-intrusive, yet I often found myself humming the themes after the episode had ended.

I do have a few nitpicks. The aforementioned video footage of a UFO in Brooklyn, NY, showing a red light in the night sky looked quite impressive to this skeptical curmudgeon’s eyes, and yet the full video wasn’t shown. At least if it was, it appears to have been edited into pieces, and perhaps not shown in a continuous chronological order. I would have loved a more detailed examination and explanation of this video – where and when it took place, the identity of the person doing the filming, maybe some slowed-down and enhanced or zoomed in angles. It was quite intriguing, and yet I feel like not enough time was devoted to the one seemingly “authentic” piece of footage that was shown. I also wish they had gone into a bit more detail about the Kecksburg Incident, as I feel it’s a fascinating tale, but not thoroughly explained here. It’s referenced many times in this series, and while many people interested in UFOs will be familiar with it, anyone new to the subject might be left a little confused as to why it got so much play in the episodes.

Overall, On the Trail of UFOs is better than any UFO show on TV, and that’s mainly because of who and what the Small Town Monsters brand is. Funded by viewers who want quality paranormal documentaries, there’s no pressure or expectations here for these productions to turn into their melodramatic, ratings-grabbing counterparts that currently pollute cable TV. Once again, Seth Breedlove presents a serious look into a phenomenon that is truly mysterious, with no hand holding of the audience, no leading the viewer towards a specific belief system. Just stories and history, presented in such a way as to make the viewer wonder for themselves and come to their own conclusions. 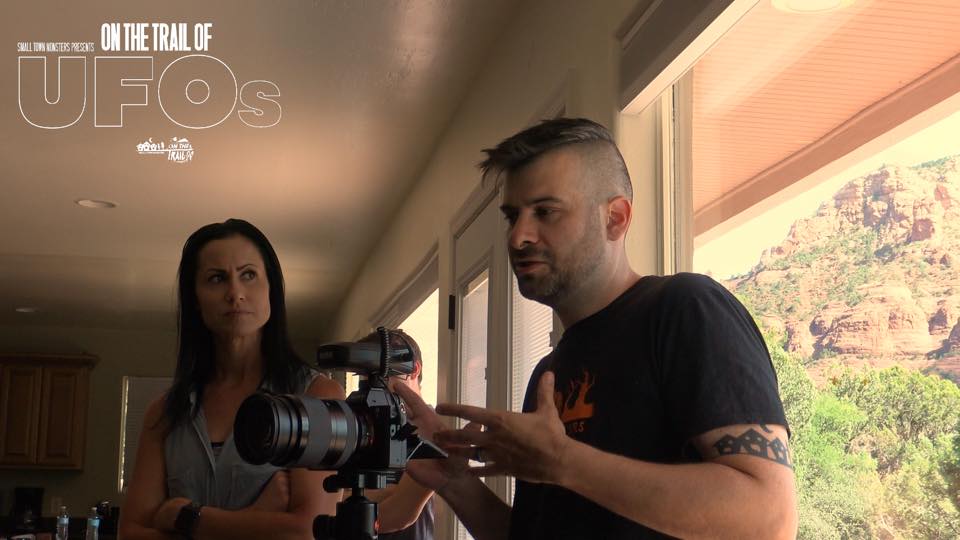 Preorder your copy of On the Trail of UFOs here! Official release is March 20th, available on Blu-Ray and DVD.

On the Trail of UFOs – Review
Episode 100