The Paranormal in History: Ghostly Gunshots

A little something different today, as we continue with our “Paranormal in History” series. This is what happens when paranormal investigators also have accounts with Ancestry.com. This week, the article is from the Chronicle Telegram in Elyria, Ohio, dated March 25th, 1921. Apparently some locals in Marion, Ohio went to do some ghost hunting at a local home where a murder occurred in 1919, when Miller Herman shot his sweetheart Dossa White to death in the Err Herman house. The would-be ghost hunters investigated the home after reports that gunshots were heard in the home on the second anniversary of the murder. Along with the gunshots were sounds of footsteps and pounding in the home. 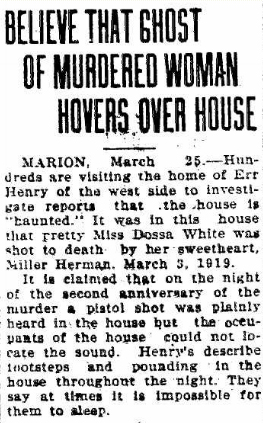