Home » The Curse of Bluidy Mackenzie
The Paranormal in History

The Curse of Bluidy Mackenzie

In Edinburgh, Scotland, something is lurking at the back of Greyfriars Cemetery that isn’t as friendly as Greyfriars’ Bobby, the legendary small dog associated with the graveyard. Ever since the winter of 1998/99, when a homeless man tried to seek shelter in the ornate mausoleum of Lord Advocate, George Mackenzie, an entity called the Mackenzie Poltergeist has been attacking visitors to the Covenanter’s Prison. The attacks were so bad that the authorities have locked the Prison to the public. Access can only be gained by taking part in the City of the Dead ghost tour, and  after hearing a stern ‘hazard’ warning. 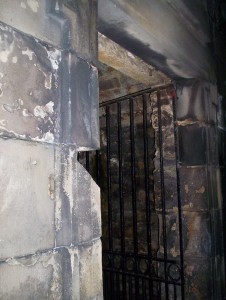 The Covenanter’s Prison and George Mackenzie are closely linked to a particularly dark patch in Scottish history, the latter part of the fifty years religious persecution of the Covenanters. These were a group of Presbyterians determined to defend their outlawed branch of Christianity and were something of a pet hate to George Mackenzie. As Lord Advocate, it was his job to grind them down, and this he did with great zeal. He earned the nickname “Bluidy” Mackenzie for his efforts.  In 1679, after the Battle of Bothwell Brig, Mackenzie incarcerated over 1000 Covenanters captured at the battle in a small section of Greyfriars Cemetery, in what is believed to be the first concentration camp in history, and known today as Covenanters Prison. Many of the prisoners died. They were ill fed and made to face a harsh winter in the open as the prison was unsheltered. Guards had a free rein to shoot, and many prisoners were executed at the front of the graveyard, their heads hung on spikes on the cemetery gates. Some were sold into slavery, and some managed to get free by either renouncing their religion or bribing a guard. There were just over 200 left of the original number by time the Covenanters were set free from Greyfriars.

In 1691, George Mackenzie died. He was buried a few hundred feet away from the Covenanter’s Prison. One of the local legends went that his coffin moved about by itself because of his anguish at being buried near the site of the misery he orchestrated. As to the veracity of that, I’m not so sure, but angst between the ghosts of Covenanters Prison and Mackenzie is just one of reasons given for the existence of the Mackenzie Poltergeist. The entity is named this as it’s believed to have originated in Mackenzie’s mausoleum, when the aforementioned homeless man sought shelter there during a rainy night. He managed to get right down to where the coffins lie and experienced something nasty enough to have him fleeing back into the storm. There’s differing speculation as to what that was. Local author Jan-Andrew Henderson believed that something was disturbed that night, which has been grumbling ever since. For some strange reason, the entity moved from Mackenzie’s mausoleum into an empty mausoleum in Covenanter’s Prison. 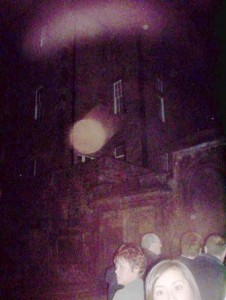 In the early spring of 1999, people began complaining of being scratched and otherwise physically attacked when going into the Prison. Edinburgh City Council were perturbed enough to lock the gates to the public, and stories abounded of the strange ghost that ‘lived’ in what became known as the Black Mausoleum. At the same time, Jan-Andrew Henderson wanted to start his own ghost tour, but one that focused on a contemporary haunting. He heard about the poltergeist, made some enquiries, and the City of The Dead Tour was born. To begin with, Henderson and a friend took the tours, gradually taking on more tour guides as demand grew. The tour became very popular quite quickly, and is now one of Edinburgh’s leading ghost tours. It starts outside St Giles Cathedral in the city centre, taking in some twisting wynds and a steep hill, before ending up in Greyfriars Cemetery and Covenanters Prison, where it ends in the Black Mausoleum. Basically a poltergeist show and tell.

From day one, things happened to those taking part in the tour. People have been scratched, punched, seen strange figures and heard odd noises in the Prison. Quite a few have passed out in the Black Mausoleum, and only come to when taken outside. Some have been sent to hospital. The tour operators say that to date, they believe the poltergeist has attacked several hundred people, most of which they have recorded. Jan-Andrew Henderson, for it’s convenience to his work, once lived in a tenement flat overlooking Greyfriars. Several flats in the block had been experiencing bizarre phenomenon attributed to the Mackenzie Poltergiest, including fires. Henderson’s flat was destroyed by fire in 2003, not long after he released a book on the haunting,  The Ghost That Haunted Itself. Quite a few of his friends believed he’d been pushing his luck with the ghost.

I’ve been on the tour a couple of times since 2005. Not much in the way of the reported attacks happened, although I came away with some pretty nice shots of the Prison on my first visit. The second visit, one girl walked out of the Black Mausoleum before the guide had finished his talk. It is quite eerie being in the Mausoleum. It’s pitch dark, and the atmosphere is quite oppressive. Not helped by being packed into a small space with about 20-30 other people.

Part of the atmosphere seems to emanate from the history of the spot. One of the things that upsets people appears to be the brutality that happened in the prison. A way to explain this away is to attribute it to a poltergeist. In fact, the poltergeist to me serves as a way of remembering what went on. If the story of the Covenanter’s Prison was recounted as a purely historical event, minus the paranormal additions, it would probably fade. Scotland, let’s not forget, is a place where lots of violent events have occurred in the past. Yet another tale of nastiness would meld into the background. The ghost story seems to be a nice tool in making sure these things are remembered. And there’s not many people who don’t enjoy a good ghost story.

The Curse of Bluidy Mackenzie
Episode 6