For the past two weeks, my “Throwback Thursdays” of the paranormal have focused on bizarre creatures – the Wildman of Rockaway Beach, and the Coney Island Monster. But this week, I’ll be focusing on a ghost that haunted the intersection of two streets in South Brooklyn, New York, back in 1890.

Now before I proceed, I have to mention that this article talks about a ghost haunting a spot in Brooklyn that borders the Carroll Gardens, Columbia Waterfront, and Cobble Hill neighborhoods. For anyone familiar with these locations, they will point out right away that this is not southern Brooklyn. Geographically, southern Brooklyn would be more towards Coney Island, Gravesend, maybe even Bath Beach or Bensonhurst. But the Columbia Waterfront area is in the northern section of Brooklyn, near the modern day Brooklyn Battery Tunnel (sorry, I refuse to call it the Hugh L. Carey tunnel, and never will, carnsarnit!). But this article is from The Brooklyn Daily Eagle in 1890. At that time, this area was historically called South Brooklyn, as it was the southern end of the then Village of Brooklyn. To this day, this area is still sometimes referred to as “South Brooklyn” or “Southern Brooklyn” even though it’s not geographically the southern part of the borough.

A Woman in White

But back to the ghost story. On August 14th, 1890, an article was published in The Brooklyn Daily Eagle detailing the South Brooklyn neighborhoods encounters with a ghost. Residents there reported seeing a spectral woman in white. Witnesses claimed she seemed to be a young woman, clad all in white from head to toe, and with what appeared to be a white hood over her head. She walked with her arms hanging down, but her hands clasped in front of her. Apparently, her footsteps could not be heard, and she’d disappear right before one’s eyes. Most of the sightings were in the intersection of Union Street and Columbia Street, but also in some of the surrounding buildings and alleyways. One man thought she was a neighborhood woman named Mamie Kennedy, not knowing that the woman he thought he was seeing had died days earlier.

I actually used to work a little north of this location, but when I was a field investigator for ACS. As I mentioned in The Coney Island Monster, most of my clients lived in Coney Island, but my main office was maybe 3/4 of a mile north of where these hauntings took place. Pretty cool. The neighborhoods are old here, as they were among the first to really boom as Manhattan started becoming the financial center of the country. To this day, the Brooklyn waterfront area is gorgeous, and still quite historic. It’s not hard to imagine stables and police officers with lanterns patrolling the streets at night.

Interestingly, there are many witnesses to this “ghost.” Even people who were skeptical and claimed to have seen the woman in white said they saw something, even if they personally didn’t believe it was a ghost. I do think it’s fascinating that even Officer McGrath, a police office, claimed to have seen her, and not only that, but that he witnessed her disappear before his very eyes.

An intriguing ghost story, to say the least. Multiple witnesses, all reporting seeing the apparition of a woman in white, but not located in a house. Rather, she seemed to roam the streets of Brooklyn, a quickly developing area of New York City at the time. Some witnesses reported that she vanished right in front of them, while others who saw her just thought she was simply a young woman clad all in white. So skeptic or not, I think it can be agreed upon that a woman in white was “haunting” this intersection in the wee hours of the night. Was this a case of mass hysteria? People getting worked up about a “ghost” and then any odd person out at an ungodly hour became a paranormal apparition? The article does mention that a German resident accused Officer McGrath of being a drunk, which might explain his “ghost” sighting. Once news broke, other residents may have latched onto that story and wanted their own ghostly encounter, so anyone walking the streets at night (which to be fair, were not well-lit back then) could appear almost supernatural. Or maybe it really was the ghost of Mamie Kennedy, the young woman who had died shortly before the sightings began. 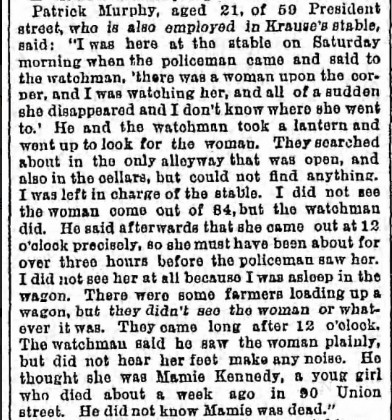 The Ghost of South Brooklyn
Episode 24