Coney Island has always been a special place for me. As a kid, my parents would bring me to the boardwalk to visit the New York Aquarium and grab some hot dogs and french fries at Nathan’s Famous, the iconic hot dog stand. As I got older, I’d take trips on Sundays with my father and uncle to Nathan’s for hot dogs, french fries, and since I was an adult, a large beer (or two). My career as a Child Protective Specialist took me to Coney Island almost daily when I was an investigator in Brooklyn, as most of my clients resided out there. My wife and I have taken my son there to go on the rides, and to see the weekly fireworks shows they have in the summer (when there’s no worldwide pandemics going on). I’ve spent a lot of time in Coney Island.

But as much as I love Coney Island, it is a place with a creepy, dark, and tragic history. In the early 1800s, Coney Island’s beachfront property was being developed as a vacation spot, due to its proximity to Manhattan. Hotels started springing up, and by 1867, tourists could access the island by rail. The first amusement ride was built there in 1876, and by 1880, Coney Island was the largest amusement park in the United States, attracting over 7 million visitors per year. Back in those days, boardwalks and amusement parks were known for their freak shows, and circuses were infamous for their poor treatment of animals, especially the tragic story of Topsy, a female Asian elephant who was executed by electrocution for “bad behavior,” namely because she didn’t like being tormented by drunken visitors. In 1911, the amusement park Dreamland caught fire, scattering circus animals and completely leveling the park before it could actually open. After World War II, the park’s popularity began to fade, as people started frequenting more exotic vacation spots. In the 1950s and 1960s, real estate developers (most notably one Fred Trump) tried to develop Coney Island into residential complexes. By the 1970s, housing developments were being built all around the amusement area, most of the parks were abandoned, and crime skyrocketed. Thankfully, the area has seen a revitalization in recent years, with amusements expanding, and Keyspan Park opening up, hosting the minor league Mets farm team, the Brooklyn Cyclones.

But the most fascinating story to me has always been the little-known tale of the flying monster of Coney Island. I’ve mentioned it before, but the story goes like this: back in September of 1880, people in Coney Island reported seeing a flying humanoid about 1,000 feet in the air, flying towards New Jersey. The flying man reportedly had the wings of a bat, and the legs of a frog, and appeared to be doing a “swimming” motion through the air. This bizarre figure appeared to be black in color, and witnesses said the man’s face could clearly be seen, wearing a “cruel and determined expression.” Here is part of the article from the September 12th, 1880 edition of The New York Times. 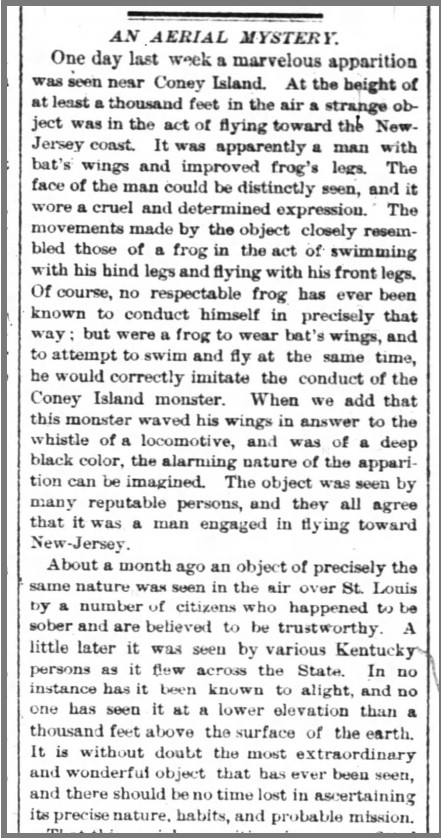 Now, this was Coney Island in its heyday. Circuses, freakshows, people visiting from all over – this was literally a dreamland. So was this really just some avant-garde performance artist? A (perhaps somewhat mad) scientist trying out a new contraption? Or was this really some sort of bizarre cryptid? Of course, the first thing that comes to mind is Mothman. A dark-colored, flying humanoid, Mothman was originally going to be dubbed “Batman,” but that was scrapped due to the popularity of the Batman TV show in the 1960s. But this would have been over 80 years prior to the famous Mothman sightings in Point Pleasant, West Virginia. The Jersey Devil is another possible candidate. With large, bat-like wings, a horse’s head, and cloven feet, the Jersey Devil bears a striking similarity in appearance to the Coney Island flying man. Plus, the Coney Island monster was said to be flying towards New Jersey. However, this figure sounds to me like an entity that was originally reported in Great Britain: Spring-Heeled Jack. This enigmatic figure was often described as being a very tall man, with a terrifying face, a long black cloak (often depicted in penny dreadfuls as bat wings), sometimes spewing flames from his mouth, and the ability to jump extremely high, and for long distances (hence the “spring-heeled” moniker). The first sightings of Jack were in London in 1837, and the last reports I could find were in 1904. So perhaps Spring-Heeled Jack made a visit to Coney Island?

The rest of this article from the New York Times just goes on and on, talking about the suspected “aeronaut” and how he had better make his invention public and get proper patents and such. It’s quite a funny read, actually, as the author almost seems exceptionally peeved that someone created a flying suit before he could. If anyone would like the full article, I’m happy to provide it to you. Either way, I love these little paranormal throwbacks. Do you think this was a man who invented (but never patented) an actual flying suit? Was this an early Mothman sighting? The Jersey Devil? A visiting Spring-Heeled Jack? Or yet another New York City cryptid, like the Rockaway Beach Wildman?