The Wildman of Rockaway Beach

Anyone with an interest in Bigfoot is aware that New York has its fair share of Bigfoot sightings. Sure, when most people think of New York, they are mainly thinking of New York City – skyscrapers, the Statue of Liberty, subways, Time Square, and millions of people. It’s the city that never sleeps. But most of New York state is rural. Most famously, New York’s Whitehall region is recognized as a hotbed of Bigfoot activity, mainly due to one well-known encounter from 1976. Brian Gosselin, a police officer at the time, had a close encounter with a large, hairy humanoid on Abair Road in Whitehall. Since then, countless reports from Whitehall have been recorded, with many sightings also in nearby Adirondack Park, the Catskill Mountain region, and the Hudson River Valley. The Adirondacks are a huge area, named for the Adirondack Mountains, and the park itself covers 9,375 square miles. It’s mostly wilderness with small towns and settlements dotted in the interior. I myself have gone Bigfoot hunting in the Adirondacks three times – to Silver Lake Wilderness, Cedar River Flow, and John Pond. Upstate New York, and the Adirondacks region in particular, could not be any more different than New York City.

So imagine my surprise when my wife showed me this old newspaper article from The Brooklyn Daily Eagle, dated December 2nd, 1885. Allegedly, a group of men near Atlantic Park in Rockaway Beach, Queens (one of the five boroughs of New York City) spotted a large, hairy “wildman” dancing erratically on the beach. Upon seeing one Mr. John B. Ennis, the creature screeched and darted back into the ocean waters. The men, including Ennis, were armed and continued searching for the creature, but it seems to have vanished beneath the waves, never to be seen again. 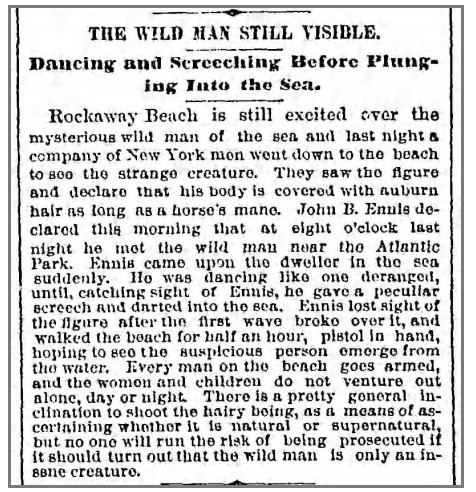 Physically, the creature sounds pretty much like a Bigfoot – a hairy “wild man” with auburn hair “as long as a horse’s mane.” But was this really a Sasquatch sighting? If so, everything else about this feels wrong. Rockaway Beach is a long stretch of hamlet in Queens, just southeast of Coney Island. These days, it’s fairly close to JFK International Airport, but even way back in 1885, this would not really have been Bigfoot country. First of all, it’s a beach on a very narrow hamlet. Not much cover for a large, shy, elusive primate. Secondly, the fact that the creature jumped into the ocean to escape the men who encountered it seems odd. Bigfoot seem to stay deep in the woods, and while there are reports where they have been seen swimming, it’s usually in a small lake or pond, not in rough, dangerous ocean waters like the once that lash the Rockaways. So what was this creature?

The 19th century was full of hyperbolic media accounts. Yellow journalism ran rampant, and often, stories were sensationalized, exaggerated, or just flat-out made up and fabricated, all in the interest of selling the most newspapers. Historical accounts from this time period can get fairly bizarre – the 18th and 19th century reports of “airships” come to mind immediately – but there were also many, many stories of hairy wildmen. Now, some of these stories could in fact be true. But many of them also turned out to be misidentifications. Mental illness was not very well understood back then, and someone wearing ragged clothes, animal skins, and acting in a bizarre fashion could have seemed monstrous. I don’t know for a fact that this is what happened here, but the behavior of this creature is odd, to say the least. And ultimately, it just doesn’t line up with most other Bigfoot encounters. Sadly, we may never know what this really was.

Fun fact: The exact location of Atlantic Park is uncertain to this day, with some speculation putting it right next to Belle Harbor, but also possibly closer to Edgemere. No matter how you look at it, though, Rockaway Beach is unusual habitat for a Sasquatch.

What do you think this creature was? A fake story to sell papers? A case of mistaken identity? Or a bizarre New York City cryptid that hasn’t been seen since?

The Wildman of Rockaway Beach
Episode 22