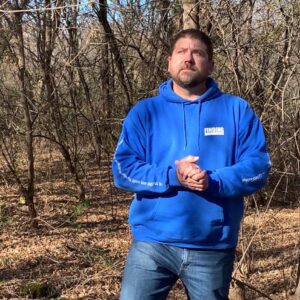 Back in March, as the reality of the COVID-19 lockdowns began to really hit home for me, I started really yearning for the outdoors again. That wasn’t really feasible, so I began watching paranormal documentaries that would sort of let me be out in the woods, even if it was only vicariously. And the first film I stumbled upon was a neat little gem called Finding Jay. I did a full review of the film, which you can read here, but in essence, Finding Jay follows Wisconsin-based paranormal investigator Jay Bachochin as he hikes deep into the Kettle Moraine State Forest in search of the elusive Bigfoot. Jay documents a number of field investigations, sometimes with family or friends, and other times with fellow well-known paranormal investigators such as Eric Altman or Linda Godfrey. Overall, the film is less about Sasquatch, and more about Jay, and the type of investigator, husband, and father he is. It’s a great film to watch if you really want to know what it’s like to get out deep in the woods to search for Bigfoot, but don’t want to actually go. Or can’t go due to the state of the world right now.

This past Friday, Jay released 50 minutes of bonus footage – extended interviews, deleted scenes, and even a gag reel. So what goodies can you expect to find here in Finding Jay: Lost and Found?

We start off with an introduction by Jay, and then it’s a full trailer for the original Finding Jay. It should go without saying that you should watch the original film before getting into these extra goodies. Then we are off, starting with an extended interview with Randy Messamore, who details his encounter with an alleged Bigfoot some 30 years ago when he was a police officer. He even takes Jay to the location of his sighting to illustrate to the viewer exactly what he saw. Randy’s story is quite compelling, and he comes across as quite sincere and believable. Good stuff here.

Next up are some deleted scenes, as Jay and his friends come across a mutilated deer on a night investigation, and then we get another extended interview with Scott Markus. More of a ghost hunter than a Bigfoot hunter, Markus and Jay have some unusual – and possibly paranormal – experiences deep in the woods. This interview fleshes out some really cool parts of the main film. More deleted scenes follow, including an interesting but ultimately inconclusive discovery of a dead bird.

Then it’s on to another extended interview, this time with journalist and researcher Linda Godfrey, who brought the Beast of Bray Road to national attention. More footage here of Linda and Jay investigating the woods, and again, good stuff, as it’s always nice to hear Linda’s perspective. The film wraps up with a gag reel – bloopers, Jay and his friends being silly, and Jay’s kids being cute.

Finding Jay: Lost and Found is a nice addendum to Finding Jay. As with most deleted scenes, pretty much everything that got cut here was not really integral to the main movie, and are just nice extras. The real meat and potatoes here is the extended interview with Randy Messamore, and is absolutely worth watching. The other interviews are good too, and really add more depth to what was already in the original film. I’m the type that would much prefer a longer documentary film, so I do wish these interviews and some of the deleted scenes were left in the original cut, but I am thankful that Jay released them here. Definitely check this out (you can watch the entire Lost and Found film below), as well as the original Finding Jay (available on Amazon Prime)!