Home » Skinwalker: The Howl of the Rougarou – Review
CryptozoologySlider

Skinwalker: The Howl of the Rougarou
Directed by Seth Breedlove | Small Town Monsters 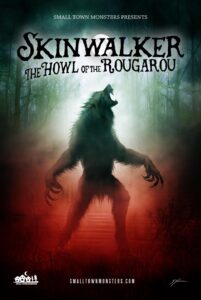 The term “skinwalker” has gained a lot of notoriety in the past few years. In Navajo lore, a skinwalker is a shapeshifting shaman, and can take the form of various animals, such as coyotes. Or in some cases, other human beings. Skinwalker Ranch in Utah has brought the lore to the forefront, even gaining a popular TV show. The ranch is alleged to be a vortex of paranormal activity, including encounters with UFOs, ghosts, Bigfoot, and other strange phenomena. For most people though, a skinwalker conjures up the image of a canid-humanoid hybrid creature. Werewolf. Dogman. Or as it’s called in the Southern United States, the Rougarou.

Louisiana Is the South

Director Seth Breedlove’s latest offering, Skinwalker: The Howl of the Rougarou, takes a closer look at the southern version of the phenomenon: the Rougarou. Cryptozoologist Lyle Blackburn (author of the recent book Sinister Swamps) is appropriately back for narration duty, as the Small Town Monsters team travel to the bayous of Louisiana. The swamplands of the American south are infamous for paranormal phenomena. Swamp beasts like the Boggy Creek creature or the Honey Island swamp monster. UFOs and other strange lights in the wilderness. And countless stories of ghosts and hauntings. But is there something more ominous prowling the marshlands?

The film kicks off with a dive into the history of the skinwalker. First, through Native American lore, and examining how competing tribes would try to gain an advantage over their enemies. By channeling supernatural energy, certain shamans could allegedly become shapeshifters, turning into animals, such as coyotes or wolves, or even rabbits or birds. Second, the film looks at French and French Canadian settlers to the region, and the legends of the loup-garou that originated in Europe. These Old World werewolf legends seem to have intermingled with skinwalker tales, and the Rougarou was born.

In most tellings of the story, especially modern ones, the creature is more of a wolf-man hybrid. Reports claim that it’s an upright creature, walking on its two hind legs, but with the head of a wolf or large dog. The hands have fingers, but they are more claw-like. In most lore, becoming a Rougarou is a curse, and the only way to break the curse is to have someone else become the Rougarou. People who see the creature are not supposed to speak of it for 101 days, lest they become cursed as well. 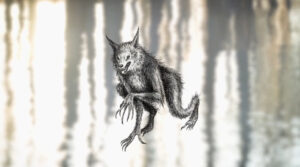 The heart of any good paranormal documentary is the eyewitness testimony. And there are a number of stories here, from the intriguing, to the creepy, to the downright baffling. A number of witnesses here tell some second-hand stories, or stories from when they were kids. Some of the second-hand stories they are retelling are from relatives, who were kids at the time of their encounters. And for me, stories like that tend to lose their luster a bit. Retelling someone else’s story always loses something in translation, and it’s hard to ask follow-up questions and get truly accurate answers.

Additionally, children, for the most part, can be easily frightened and confused in the woods by things they don’t understand. Even when those things are perfectly natural and normal. And this is further bolstered by the fact that some of the locals interviewed for this film admit that their parents would use stories of the Rougarou to frighten them as children into having respect for the woods.

A lot of the eyewitness accounts don’t match up, either. What is being encountered can vary wildly. Some see a humanoid with the head of a wolf. Others see a white rabbit or a chicken acting oddly. Other stories involve enigmatic men or women on lonely roads at night, acting strangely or seemingly moving more quickly than a human could. However, I suppose that all fits in with the “shapeshifter” nature of the Rougarou. But in the end, it just seems to muddy the waters of the phenomenon.

Those issues aside, Skinwalker: The Howl of the Rougarou is still a fun, engaging documentary. Small Town Monsters consistently delivers quality films, and this one is no different. In my review for On the Trail of UFOs: Dark Sky, I remarked on the high quality of the UFO reenactments. The team deftly continues the trend here. Something that could easily look goofy or unintentionally funny (a man in a dogman costume) looks authentically terrifying here. Kudos to the team for cleverly hiding any flaws the costumes may have had while creating a convincing found-footage vibe.

Personally, I’ve never given much credence to the skinwalker or dogman phenomenon. I feel like it seems too mythical, too magical, to really be taken seriously. Where do the campfire stories end, and where does reality begin? That’s a question that can be asked of any cryptid, honestly. But for me, there’s just a few too many leaps of faith to get to a Rougarou. And while the eyewitness accounts as a whole don’t do much to sway me from my particular position, it’s still a fascinating watch.

This is really a film about folklore, about how different cultures explain the things they don’t always fully understand. But it’s also about genuine experiences people have had. So do these stories confirm that the legends are true, and that there really are mythical beasts roaming the southern swamps? Or are people simply having encounters because the stories have been ingrained in their collective cultural consciousness since childhood? Like all Small Town Monsters films, the viewer is left to make that determination on their own. It’s one of the things I love about all STM documentaries.

Ultimately, Small Town Monsters has crafted a sober, thoughtful look into a truly creepy and fantastical legend. Folklore is part of the DNA of America. And it’s woven into the fabric of our nation,  whether it’s Native American myths or legends brought here by the settlers.

And perhaps the Rougarou is simply that: just another strand of folklore. A cultural catch-all for anything weird encountered in the woods or swamps. Or just a tall tale told to children to scare them out of straying too far from home past dark.

Or maybe, just maybe, there are unfathomable beasts lurking in the dark in the bayous of Louisiana. Skinwalker: The Howl of the Rougarou will definitely make you wonder…

Skinwalker: The Howl of the Rougarou debuts tonight, 9/14 at midnight EST, on most VOD streaming platforms

Skinwalker: The Howl of the Rougarou – Review
Episode 193