Ahh, Bigfoot. Who doesn’t love the big, hairy, legendary cryptid of North American folklore? I’ll tell you who: unsuspecting 6-year-olds. And the parents of said 6-year-olds who hired a birthday party Bigfoot to entertain the kiddies.

It all started innocently enough. Brett McPherson, of Broken Bow, Oklahoma, was planning a birthday party for her daughter, Blaynee Mae, who was turning 6. Ms. McPherson, eschewing more traditional birthday party entertainment such as a clown or a popular cartoon character, decided to hire an actor to portray Bigfoot. Which I totally get. I was very much into Bigfoot as a kid. My own son was even into Bigfoot at that age. So McPherson had every reason to believe that this would go over quite well with the tykes. The female Bigfoot, named Cinnamon, was going to show up with balloons and wearing a frilly tutu. Cute, right?

Well, not so cute when the Bigfoot costume in question is frighteningly real. Cinnamon the Sasquatch shows up, wearing a tutu and holding colorful balloons, as promised. But the mask is horrifyingly lifelike. Long, matted hair, beady eyes with bags under them, and large teeth make the costume look more like a real, living animal than a cartoonish mascot. It looks very similar to the Jack Links “Messin’ With Sasquatch” character. Have a look at the video:

The reaction from the kids is understandable, yet hilarious. They scream, cry, and freak out after spotting the “monster” peeking in the window. A monster holding party balloons and wearing a tutu, but still. It’s a parenting fail, but a very funny one. Kids can and do love Bigfoot. But much like with Santa Claus, many kids prefer their mythical characters to keep their distance. On TV, in books, or in a movie – totally fine. But it’s a very different story when Santa shows up at the front door, bellowing “Ho ho ho!” Or a parent plops the kid in Santa’s lap for a pic. Bigfoot is apparently no different.

Have no fear, though. The kids all eventually calmed down, and even made nice with Cinnamon the Sasquatch. The parents were quick to comfort the children, and lead by example, hugging Cinnamon and posing for pictures with the “creature.” Once the kids saw this, they became more comfortable, and a good time was had by all. 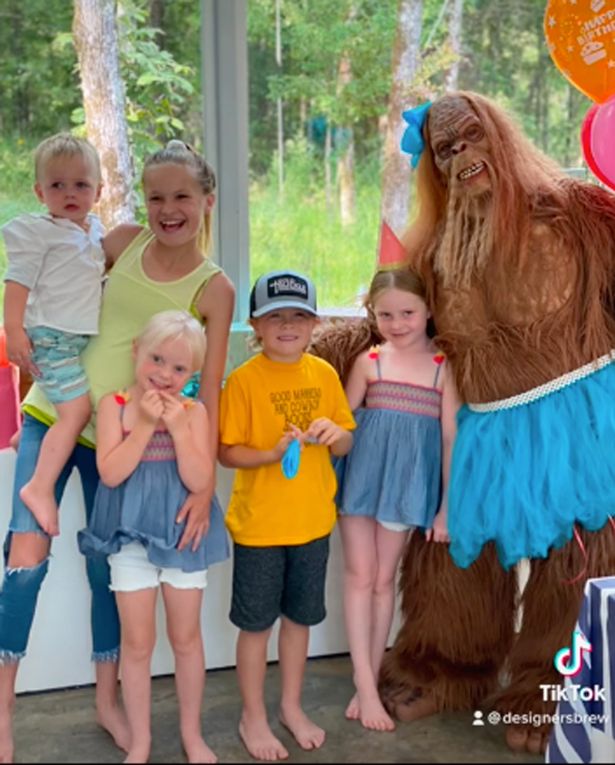