In the paranormal world, there is perhaps no other name that immediately conjures up so many visceral, negative emotions than that of Brian Harnois. The former original cast member of Ghost Hunters was often portrayed as a lovable, yet inept, buffoon, constantly making mistakes with the equipment and screwing up investigations. He was regularly ridiculed by team leaders Jason Hawes and Grant Wilson, most notably for his “Dude, run!” exclamation when he got spooked on one of their investigations. While most other original cast members (i.e., Donna LaCroix, Kirtsyn Gartland, Andy Andrews, etc.) were unceremoniously yet quietly booted from the show and replaced by actors or more “ratings friendly”-types, Brian was disciplined on air and exiled from the team, allegedly for missing meetings and investigations, and constantly lying to Jason and Grant. But that was not to be the last that the paranormal community would hear about Brian Harnois.

In late 2012, Harnois was reported missing by Michelle Harnois, his now ex-wife and the mother of his children. He allegedly left an apparent suicide note on his Facebook page, alarming his family, friends, and fans. He was later found to be alive and well. Police became involved in the search, and there was an emotional outpouring of support on social media. Ultimately he turned up safe and sound, and received treatment for an undisclosed mental issue.

Then, in 2013, all of the goodwill from his fans seemed to disappear. Harnois, who had been promoting his “Dude, Run!” paranormal tour, was being accused of fraud. Many maligned fans took to social media to accuse the ghost hunter of scamming them, selling them merchandise such as t-shirts and DVDs, as well as tickets to upcoming events where he was to appear, yet Harnois failed to deliver. Money was taken from customers, but the t-shirts and DVDs were never sent out, and he allegedly also no-showed a number of public appearances where he was scheduled to speak. People also reported that when they tried to get refunds or make complaints to Harnois online, they were ignored, blocked, or insulted, or some combination of the three. Alternately, sometimes he’d claim he was battling mental illness, or had computer issues, to explain and excuse his behavior. Fans started to suspect that his “suicide” incident from the year prior was just an attempt for Harnois to drum up interest in his name again for his “Dude, Run!” tour. 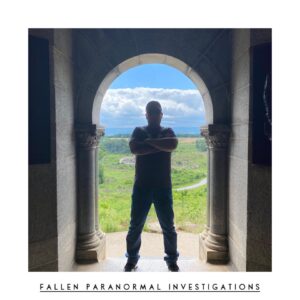 And now it seems Harnois is back again, though being a bit more subtle this time. A quick glance at his social media shows he may be starting (or at least closely collaborating with) a new paranormal investigations team, called Fallen Paranormal Investigations. Their online presence is negligible and what few details there are remain vague, but Harnois does seem to be involved in some shape or form, and as damaged as his reputation may be, there will always be those out there who are star-struck and will welcome him to their team with open arms. They seem to have visited Gettysburg, PA, just last month, but I’m frankly surprised more isn’t being made of this. Perhaps he (and the team as a whole) realizes that the online backlash would be swift and unkind, and it’s best for now to fly under the radar. I understand the passion for being a paranormal investigator. I Just hope he has learned from the many, many lessons he’s endured over the past decade, and tries to earn back some of that goodwill from fans.

Personally, I’m not sure what to think of Harnois. To say he is a controversial figure in the paranormal community is an understatement. He went from the fan-favorite comic relief in the early seasons of Ghost Hunters, to someone the fans absolutely reviled and lost all respect for, with accusations of him being a scammer and an outright fraud. Admittedly, he got a raw deal to start with. I’m sure producers at SyFy and Pilgrim Films made sure to edit his gaffes to be as awful (yet as funny) as possible to ensure good ratings, which ultimately just led to lots of abuse of Harnois online. There are also reports of Jason Hawes and Grant Wilson verbally abusing Harnois (along with the aforementioned cast members) behind the scenes. I’ve even personally heard some personal accounts from people I know who dealt with Hawes, saying he’s not a very nice fellow, so this is hardly surprising. Even Grant Wilson eventually departed Ghost Hunters under mysterious, undisclosed circumstances. And presently, Hawes and Wilson seem to be having a cold war of sorts, as Hawes left the Ghost Hunters brand to do the new show Ghost Nation (with Ghost Hunters alum Steve Gonsalves & Dave Tango), while Wilson swiftly came back to take over the Ghost Hunters franchise, on their new home of A&E. Hawes has been diplomatic about his feelings on this, but just barely so. He’s clearly not happy to see Wilson immediately jumping back into Ghost Hunters after publicly leaving the show all those years ago.

Honestly, I think Hawes should never have allowed Harnois on television. He always claimed to be Brian’s close friend while they were in TAPS, but also claimed to know about his issues of irresponsibility and lying. Any good friend would have realized that any modicum of fame could potentially be really dangerous to someone like Harnois. Other original cast members were discarded fairly early on (yet when the show was clearly becoming a juggernaut) and most of them have completely avoided any controversy, even though they probably all felt slighted. They just moved on with their lives. Case in point: Kristyn Gartland (now Kris Ferrelli) is now a nurse. No scams, no fraud, no controversy, just successfully living her life.

Lots of blame to go around, lots of “he said, she said,” but ultimately, the only people who will ever really know are Harnois, Hawes, Wilson, and the rest of the TAPS team. I really hope Brian Harnois does things right this time.