Into the 400
Directed by Shane Carpenter 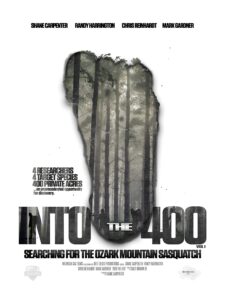 It was bound to happen sooner or later. I’ve been on a winning streak of sorts lately, watching and reviewing paranormal documentaries, and being pleasantly surprised by the quality of what I was watching, and sincerely enjoying the films. Most have been offerings from the Small Town Monsters team, but even other smaller, more personal projects have been shockingly well-done and entertaining, such as Jay Bachochin’s Finding Jay. But I finally found a documentary that just left me angry at what I just watched, and wondering why it was even produced in the first place. That film is Into the 400.

I initially learned about Into the 400 on “Sasquatch Chronicles,” the awesome podcast by Wes Germer. I particularly like this podcast because it mainly focuses on experiences of Bigfoot-like creatures from everyday people. Occasionally, Wes will have on higher-profile people from the Bigfoot community, like Cliff and Bobo of Finding Bigfoot, Dr. John Bindernagel, or authors and documentary filmmakers, but it’s usually just eyewitness testimony from hunters, campers, or other people out in the woods. Germer’s interview style is to just let his sasquatch witnesses do most of the talking, and it’s great to hear first-hand accounts of encounters with these creatures. Back in April, Wes interviewed Shane Carpenter, director of Into the 400, as well as Chris Reinhardt, Randy Harrington, who also appear in the film. Wes seemed impressed by the documentary, and from what the guys discussed on the show, it seemed like something I would really enjoy checking out. How wrong I was…

There’s an old adage that essentially says “If you go looking for something, you will find it.” Now sometimes, this can be used as a motivational phrase, pushing someone to attain their goals. But in the paranormal world, this is usually a cautionary saying. Because if you go into an old building expecting to find ghosts, guess what? Every little creak you hear, every shadow you think you see out of the corner of your eye, will be a ghost. Even when it really isn’t. The same holds true when looking for Bigfoot. In fact, it was a major criticism of the aforementioned Finding Bigfoot: every twig snap, every downed tree, every weird sound in the woods that the team experienced was assumed to be Bigfoot. And with Into the 400, this same kind of confirmation bias is on full display.

The film starts off with Shane Carpenter narrating, and alluding to an encounter he had with Bigfoot at some point in the past. Yeah, that’s about as much detail as we get. He then talks about a piece of land in the Ozarks that he’s investigating for Bigfoot activity. Why is it called the 400? And who owns the land? And why is this property significant? We are never told. Who are the guys investigating with him? We are never properly introduced to them, or who they are, or what their expertise is. It’s a bit confusing and disorienting to really have no proper introduction for any of these elements. But let’s put that aside for now. The movie starts off with the guys fishing in the undefined “400,” and subsequently coming across some alleged Bigfoot prints in the banks near the lake. Upon closer examination, we see that these are fairly narrow footprints, about 9.5″ long. Hmmm. Not very big for a Bigfoot (most typical Bigfoot prints are in the 15″-18″ range), and not wide like a typical Bigfoot print. As a point of reference, my foot is just shy of 11″ long. But it must be a Bigfoot, because they are looking for Bigfoot. Right? I mean, it has to be a juvenile! A little baby Bigfoot. There’s no way that these footprints could be those of a human woman, or a young teenage boy. Even though that’s exactly what they look like. So Shane and his friends cast the footprints, and we move on.

Shane and his team are next shown filming at night, using their FLIR thermal imaging camera, and they capture something they seem to find extremely fascinating. There looks to be something off in the distance, sometimes peeking up above some brush. You can see a little of what may or may not be the top of something’s head. It’s vaguely round, but that’s all that can be seen. No arms or legs, no humanoid figure to indicate this might, in fact, be Bigfoot. Just a little, tiny, rounded something off in the distance. So of course, they conclude it’s Bigfoot. I mean, there’s no other animals in the forest, right? The team returns the next day during the daylight hours to try to recreate their sighting, to gauge the height and approximate location of the something they saw, and they conclude that whatever they saw was twice as big as Shane’s head. Even though the comparison footage they play shows no difference whatsoever. They also claim that when they returned to camp, they caught amazing thermal footage of a large, humanoid creature pacing just behind their camp, arms swinging, walking bipedally, and clearly a Bigfoot. But of course, they couldn’t download that footage, so they can’t present it here. Of course.

“But I need more confirmation bias!,” I hear you demanding. Well, it’s here in spades. A few months earlier, Shane put a salt lick in a small cave, and now it’s been moved slightly. Like an inch. What else could have done that except for Bigfoot? Some trees fell in the woods in a weird pattern, so it must have been those juvenile Sasquatch playing games. Some rocks aren’t exactly where he placed them a few years ago, so Bigfoot must have come by and moved them. The night prior, Shane put an apple in a tree, and something mysterious caused it to now be on the ground. If only some famous scientist would come along and explain how the apple could have fallen out of the tree!

Honestly, this “film” should simply have been a YouTube video. That’s the level of quality. The one thing I did enjoy about the movie is that it was shot with what these guys had on hand, seemingly just cell phones and GoPro cameras. Nothing fancy here, and it shows. But in that way, it succeeds in being a more raw “boots on the ground” experience. But priced to rent for $3.99 on Amazon Prime at a runtime of only 63 minutes, this would be much better suited to a free YouTube channel than a “documentary” that needs to be paid for via a streaming service.

Overall, Into the 400 is the perfect documentary to illustrate how NOT to conduct Bigfoot research. I hate to be so rough on these guys, but I mean, come on. There is not one shred of even halfway decent evidence to be found here. They allude to better videos, but one was seemingly “lost” while downloading, and the other – referred to as “the crawler video” – is repeatedly mentioned, but never shown or even explained. Amazing. The only other alleged Bigfoot footage here is the FLIR clip of a white dot that could be literally any other forest creature. Confirmation bias abounds, with the team finding random things in the woods and unquestioningly attributing them to Bigfoot activity, rather than just assuming nature is being nature. Occam’s Razor, or any form of rudimentary common sense, seems to be a completely foreign concept to these guys. Extraordinary claims require extraordinary evidence, and a fallen tree or a rock that moved slightly is not the least bit extraordinary. The only clear footprints they find are very clearly human, and the “big” Bigfoot prints they claim to find are compressions in grass, and not at all obvious or remotely usable as evidence. Honestly, until they highlighted the “track” they were looking at, I had no idea what they were even talking about. Once the highlighting is gone, you lose the track completely. It just doesn’t exist, except in their very Bigfoot-centric imaginations. Their research methods are amateur at best, and completely unreliable at worst. As an example, when they placed a pile of apples for the Bigfoot to find, they come back the next day and are uncertain if Bigfoot has taken any, because they never even bothered to count how many apples they originally laid out. But, you know, they’re pretty sure one is missing. And they’re pretty sure that Bigfoot took it. They also tied threads of string between trees, to see if a passing Bigfoot would snap the thread as it walked by, and half the time, they couldn’t even remember which trees they tied the strings to. Again, your data is useless if you don’t even know what your data is.

Move along. Do not pay the $3.99 to rent this, as there is, quite literally, nothing to see here.