Monsters of the Deep – Book Review

Monsters of the Deep by Nick Redfern 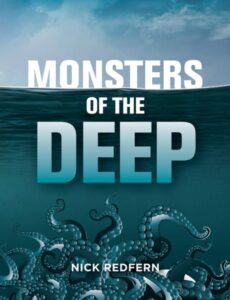 I’ve never really shied away from the fact that when it comes to cryptids, I’m probably least interested in those of the aquatic variety. Lake monsters, sea serpents, and other anomalous water-based creatures just don’t typically hold my interest. And to be totally honest, I’m not even sure why. Maybe because I just don’t spend a lot of time on or near the water. More likely? Because for the most part, I have always felt like the reported encounters are largely explainable. I mention all this for a reason: namely, that I usually skim or just totally skip any entries in compendiums/encyclopedias that have to do with these kinds of monsters. So when I got my advance copy of Monsters of the Deep by Nick Redfern (thanks to the awesome team at Visible Ink Press, who always remember me), I had some mixed feelings. I love Redfern’s work, but was not looking forward to an entire book on lake monsters and sea serpents. But I’m happy to report, even just a few pages in, my mind was changed, and I was hooked.

Monsters of the Deep is not an encyclopedia, per se, but it also does not have to be read chronologically from front to back. Instead of individual entries for each creature, the book is broken up into larger categories of monsters. Chapter One focuses on the oceanic-stories that usually bore me the most, sea serpents and giant squids, which in my mind have always been interchangeable, with one (giant squid) essentially explaining the other (sea serpents). But here, Redfern deftly delves into the history of sea serpent sightings, mainly citing 19th Century researcher Henry Lee. Reading the accounts, I was hard-pressed to simply write them off as misidentifications of giant squids. As with most sightings of anything paranormal, you can of course explain away a vast majority of the sightings by simply attributing them to witness error or even downright hoaxes. However, with the number of witnesses included in some of these stories, and taking into account that most of these witnesses were ship captains or other experienced sea-faring fellows, it’s a bit more difficult to just dismiss these tales out of hand. That’s not to say that a lot of these can’t be explained by misidentifications of giant squids, because they absolutely can be. But some of them really deserve a closer look. Redfern also discusses more mythological creatures here, such as the kraken and H.P. Lovecraft’s fictional Cthulhu (or maybe not so fictional, as the story of the NOAA “Bloop” is quite interesting and makes one wonder).

Chapter Two gets to the most famous aquatic monster of all, Nessie, and other lake monsters of her ilk, such as Morag, Champ, Ogopogo, and even the lesser-known Big Wally, Pepie, and Paddler. You’d have a hard time finding anyone who hasn’t at least heard of the Loch Ness Monster, and while some of the lore is ingrained on our collective subconscious due to mainstream coverage of the creature and countless documentaries, Redfern does some more deep diving here to regale us with some lesser-known stories about the beast, including a disturbing tale from 1932, when a Lieutenant McP Fordyce and his fiancée were traveling past the loch, and spotted a bizarre, hairy creature that resembled a cross between a horse and a camel, crossing the road (on land!) in front of their vehicle. The more famous and popular accounts are examined here as well, as are some connections between Nessie and Aleister Crowley and occultism in general. We then move on to Nessie’s less famous (and less frequently seen) cousin, Morag of Loch Morar, as well as Champ of Lake Champlain, Ogopgo of Okanagan Lake, and more obscure lake monsters Pepie, Big Wally, and Paddler, who are all, in essence, Nessies from places outside of Scotland, but each with their own little quirks. Not a fully comprehensive list of every lake monster out there, but a nice mix of the famous to the more esoteric.

Up next, we take a look at Other Inland Water Monsters, including one of my personal favorites, the Mokele-mbembe. This African lake monster is similar to Nessie in that it’s aquatic and saurian, but a slightly different kind of dinosaur. Reports describe it as more brontosaurus-like, rather than a plesiosaur. Of all the alleged water-cryptids, this one has always been the most fascinating and believable to me, mainly because the ecosystems in which it is seen are still so primitive and remote. Other monsters in this chapter mainly include larger versions of normal aquatic animals like fish, beavers, turtles, and snakes, but also bears and giant insects.

The next few chapters cover massive worms, dragon-like serpents called wurms, and giant snakes and eels. Then it’s on to urban underground monsters, and a legend that hits close to home for me, alligators in the sewers of NYC. Being a native New Yorker, it’s a tale I’ve heard repeated time and time again, so for me, the highlight of this particular chapter involves the tales of murderous creatures roaming the London Underground, the famous subterranean transit system. Subways and sewers have always fascinated me, and I’ve heard some tales of unusual things lurking in the NYC subways tunnels that would make people wish it was just alligators down there. Creepy stuff included here, to be sure.

The last three chapters covering water creatures delves into the more fantastical realm. Redfern covers more mythological/Biblical legends like Jonah and the whale, the leviathan, and the basilisk. Mermaids and mermen (and other water-dwelling humanoids) are covered, as well as the Loveland Frogman and other reptilian humanoids, wolfmen of the water, and even witness accounts of Bigfoot going swimming. And of course, no book on amphibious cryptids would be complete without extraterrestrial reptilians.

The Good: It’s a Nick Redfern book, so how could you go wrong? He’s a prolific author and seasoned researcher, and his presentation of any topic is always finely detailed. I don’t always agree with his theories, but I always respect them, as he consistently has an open mind, and can intelligently back up his points of view. In this day an age, where people on whatever side of an issue they choose seem to scream, yell, and throw tantrums if you don’t fully agree with them, it’s wonderful to have someone who can present controversial theories about subjects that may or may not exist, and to do it with a sincerely open mind. I also love how Nick includes not just the “famous” stories, but also little-known anecdotes and tidbits of lore. Sure, the mainstream stories are legendary and can stand on their own, but framed within these more obscure accounts, the reader can really start to see a bigger picture, a mythos of the cryptid, rather than just a few well-known sightings. It’s not just a long neck poking out of the loch, anymore. There’s a history to these sightings, to these legends, and Redfern weaves a well-balanced yet extremely rich tapestry here.

The Bad: In a bit of contradictory logic, Redfern spends the majority of his Introduction talking about the coelacanth, a fish well known from the fossil record and long thought to have gone extinct some 65 million years ago, but discovered to be alive and well in modern times. It’s also the unofficial poster animal for cryptozoologists everywhere, the argument usually being (in this book, as well) that if the coelacanths could survive undetected for millions of years, then so could other cryptids like the ones presented in this book. The contradiction comes in the Loch Ness Monster entry, where Redfern argues that Nessie can’t really be an extinct dinosaur (a plesiosaur) because the fossil record indicates that plesiosaurs went extinct about 65 million years ago. Just like the coelacanth. Which, as stated in the Introduction to this book, is alive and well today. To his credit, he does go on to explain other credible reasons for why Nessie probably ins’t a dinosaur, but this fossil record explanation is a bit of a head-scratcher for me. I get why he mentioned it (because personally, I agree with him), but I just wish he’d left the door open a little wider on this one, as I think it will easily confuse younger readers or those new to cryptozoology, and it’s just a tasty morsel of bait for skeptics to use as ammunition against cryptozoologists and their arguments for the existence of cryptids in general.

The Bottom Line: Another stellar entry from Nick Redfern, and a must-have for your cryptid library, whether you’re into lake monsters or not.

Monsters of the Deep will be released on Tuesday, August 4th, 2020. Click here to order!