For those of us with an interest in UFOs and the paranormal, the idea of the US government having knowledge of and interactions with unidentified flying objects is nothing new. We’ve listened to the witnesses, many of whom have been ex-military personnel and officers. The evidence has been there, but the government has always denied it, and mainstream society has just been satisfied with those denials. But after the official release of UFO videos last year from the Navy, these kinds of stories are gaining more and more traction. And now a new History Channel series, called Unidentified, will feature Navy pilots sharing their experiences with flying craft that don’t appear to be from around here. 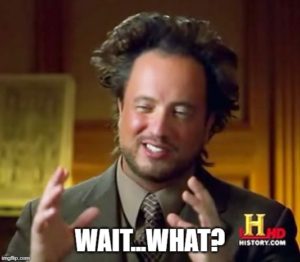 After a bombshell report detailing near-daily interactions with unidentified flying objects by Navy pilots in 2014 and 2015, Christopher Mellon has argued that this information is nothing new, and the government needs to do something about it.

Mellon, former Deputy Assistant Secretary of Defense for Intelligence, is involved with a new History Channel series, ‘Unidentified,’ which will expand on topics discussed in a recent New York Times article. In numerous interviews, Navy pilots revealed that they saw UFOs moving at hypersonic speeds, performing acts “beyond the physical limits of a human crew,” and emitting “no visible engine or infrared exhaust plumes.”

In a Wednesday morning interview with “Fox & Friends,” Mellon, who has written extensively on the topic before, outlined the reasons the Navy is concerned about these sightings.

“We know that UFOs exist. This is no longer an issue,” he said. “The issue is why are they here? Where are they coming from and what is the technology behind these devices that we are observing?”

There are indications, Mellon said, that the objects reported by Navy pilots in 2014 and 2015 were doing things that aren’t possible in this physical realm.

The speeds being reported (about 5,000 miles per hour, according to Mellon) were only sustainable for about an hour by an aircraft in the air, and these objects would be flying around all day long, the pilots said.

“Pilots observing these craft are absolutely mystified and that comes through clearly in their public statements,” Mellon continued.

Fascination turned to fear one day, however, when a Super Hornet pilot said he almost collided with one of the objects — which he described as a sphere encasing a cube. An official report was filed, and the incident shattered the previous theory by Navy pilots that the objects were a part of some sort of extremely classified drone operation.

“These are reactions between intelligently controlled vehicles operating in and around U.S. military facilities, hence the concern,” Mellon explained.

“One: there have been near mid-air collisions so there is a safety issue. Two, there is a vital national security issue which is that our sovereignty is being violated by vehicles of unknown origin,” he continued.

Although all of this information is old news to Mellon, it’s taken America by storm, and he says we’re hardly the only country to have interactions with these objects. Having written extensively about UFO sightings before, Mellon said he’s frustrated with the lack of action being taken by the government, as are the Navy pilots who experienced the sightings.

He decided that the only way to make progress was to release this information to the public in the form of his new show, and television interviews.

“We are giving military personnel on the front line a voice,” he said. “We are helping them get out the message of what it is they are encountering and why they are so concerned about it.”

It seems like it’s becoming harder and harder for the government to silence these pilots, and more and more of their stories are being shared. Not just that, but the videos that have been released seem to support these accounts. So UFOs exits, it would seem. The only question left appears to be whether or not the government actually knows what these craft truly are and where they are from.