Bigfoot! The True Story of Apes in America

Overall this is a great book, especially to newcomers to the field of cryptozoology, but even us armchair cryptozoologists can enjoy it. I’ve read just about everything ever written on Bigfoot, and I still loved this book (not to mention I learned a thing or two).

Overall this is a great book, especially to newcomers to the field of cryptozoology, but even us armchair cryptozoologists can enjoy it. I’ve read just about everything ever written on Bigfoot, and I still loved this book (not to mention I learned a thing or two).

Bigfoot! The True Story of Apes in America by Loren Coleman 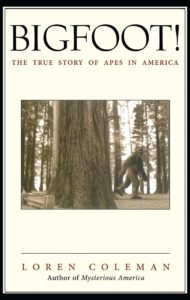 I think it’s pretty safe to say that these days, almost everyone has at least heard of Bigfoot. The name has invaded our popular culture. A monster truck, e-mail service, pizza, and hard drive company have all been named after the legendary ape-man of the Pacific Northwest. Bigfoot jokes abound on such shows as The Simpsons and Family Guy. But before the publication of Bigfoot! The True Story of Apes in America, you’d have been hard pressed to find a book that so well documents the history of this North American enigma.

Loren Coleman, for the uninitiated, is one of the world’s leading cryptozoologists. But don’t let his “expert” status or scientific credentials scare you off. In this book, as well as his others (see also the great Mysterious America), Coleman’s style has universal appeal. He speaks with an expert’s knowledge, without being condescending. Unlike some other books I’ve read on the subject, Coleman provides an easy, accessible, yet highly intellectual, reading experience. Another strong point is that Coleman isn’t afraid to call a hoax a hoax. When a story simply doesn’t have the evidence to support it, Coleman points this out. No agendas here, folks. To me, the most important thing when investigating the unknown isn’t how many degrees a person has, or how many books he or she has written. It’s how open their mind is. Coleman obviously believes in Bigfoot, yet he doesn’t tarnish his credibility by accepting all Bigfoot reports as gospel. Whether you’re an absolute skeptic or a fundamentalist believer, you’re ignoring the other side of the story, and thus, possibly the truth. Coleman’s open mind is a breath of fresh air.

The book starts off with a quick overview of some recent Bigfoot reports and a look at one of the most significant pieces of evidence since the Patterson-Gimlin film, the Skookum Cast. The cast, for those who don’t know, apparently shows the underside, legs, foot, buttocks, and other features of a Bigfoot stretching in some mud to reach some fruit that the researchers had planted as bait. It was obtained by researchers from the BRFO in Skookum Meadows, Washington, in September of 2000. The book then starts off with a pretty comprehensive history of Bigfoot, starting with Native American traditions and folklore, and ending with questions for the future. In between, author Loren Coleman covers such topics as the incident at Ape Canyon, the Patterson-Gimlin footage, the Minnesota Iceman, and even theoretical sexual behaviors of Sasquatch.

Each case study in the book is thorough, but by no means all-inclusive. Entire books have been written on the Patterson-Gimlin footage, so the twenty or so pages in this book dedicated to this subject seems abnormally brief. Where the book really shines is when it is examining other well-known incidents that aren’t as well documented in the literature overall. Stories such as Jacko the adolescent Bigfoot, Ape Canyon, and the Albert Ostman “kidnapping” are all covered in much more detail here than I have seen almost anywhere else. In other books, these stories are usually briefly touched upon in an introductory chapter, and are treated more as folklore than as actual events. Coleman examines them in much greater detail, and separates the fact from the fiction.

The later chapters dealing with sexual habits of Sasquatch, as well as the three most-asked (and possibly most important) questions regarding Sasquatch, are not to be missed. One chapter, “The Bigfooters,” nicely outlines all the major players in the investigation of Bigfoot, from John Green and Rene Dahinden, to Grover Krantz and the ever-growing list of internet sites. Even the book’s appendices have some great stuff in them. One appendix lists the 20 best places to see a Bigfoot, and the other appendix lists groups and organizations where you can obtain actual footprint casts of alleged Sasquatches.

The Good: This book is one of those rare finds that gives a good, thorough history of the Bigfoot phenomenon without becoming bogged-down in details and minutiae. Most of the major Bigfoot accounts are documented here, and even some lesser-known ones are included as well. Coleman’s literary style ensures that this book will be enjoyed by all readers. His sense of humor and wonder is a welcome addition to a genre usually lacking those qualities.

The Bad: My only issue with this book is that some of the stories and chapters are a bit on the brief side. I wish some of the topics had been fleshed out a little more, and had some more detail and back-story to them. Of course, this would have made for a longer book. If the only bad thing I can say about this book is that it left me wishing there was more of it, I guess that’s not such a bad thing after all.

The Ugly: The pictures leave a lot to be desired in this book. For one, they are all in black and white. Secondly, there are dozens if not hundreds of alleged Bigfoot pictures out there. Some are obvious hoaxes. Some are really intriguing. But there are very few Bigfoot pictures in this book. Frame 352 from the Patterson film is included, but I think at this point, it’s a law that any book on Bigfoot has to have this picture in it. There’s also another interesting picture of an alleged skunk ape from Florida. You can visit Mr. Coleman’s website for better pictures, and in full color (although any way you cut it, it looks like an ordinary orangutan to me).

The Bottom Line: Overall this is a great book, especially to newcomers to the field of cryptozoology, but even us armchair cryptozoologists can enjoy it. I’ve read just about everything ever written on Bigfoot, and I still loved this book (not to mention I learned a thing or two). Writing a book covering everything on Bigfoot would be about as easy as actually capturing the mythic beast, but Mr. Coleman has done a fantastic job of balancing brevity with as complete a history you could hope to find in one single book. This isn’t meant to be a “be-all, end-all” book on the subject, just a thorough history of a misunderstood mystery. And Bigfoot! The True Story of Apes in America succeeds almost flawlessly.

Bigfoot! The True Story of Apes in America
Episode 2