Home » Monkey on the Loose in Massachusetts
CryptozoologySliderUnexplained MysteriesUrban Legend

Monkey on the Loose in Massachusetts

I’ve always been fascinated by out of place animal stories. There’s just something so subtly unsettling about them. Because ultimately, they can’t all just be escaped circus animals or exotic pets. When I was 5 years old, there was a report of a baby elephant seen in my neighborhood of Bay Ridge, Brooklyn. Nothing ever came of it (i.e., no elephant was ever found), but it’s interesting to think of an animal like that being seen in New York City. And speaking of New York City, I also grew up hearing the urban legend of alligators in the sewers, which actually has some truth to it. But one really can’t study cryptozoology or stories of unexplained mysteries without coming across bizarre tales of out of place animals – kangaroos, big cats, even monkeys & apes. It seems as though this week, Massachusetts is dealing with a strange sighting of a monkey on the loose in the town of Tewksbury. 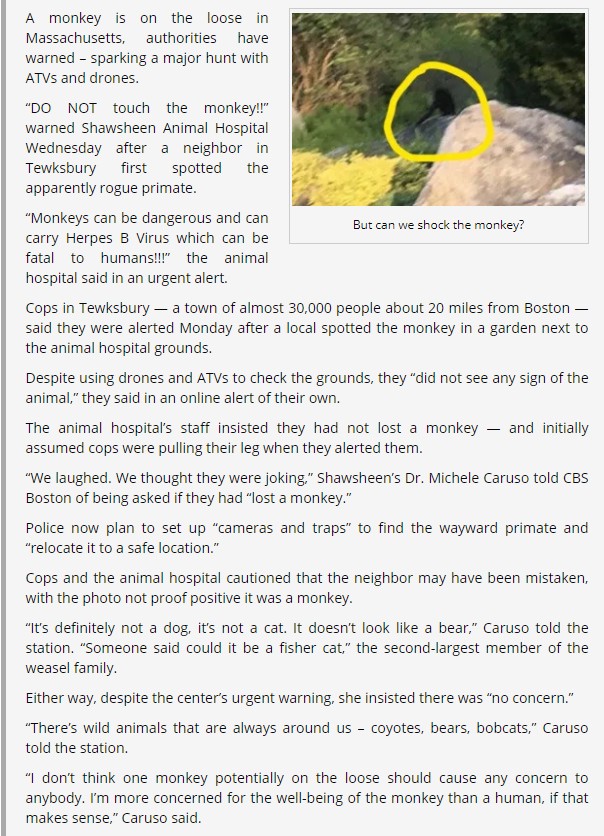 Of course, this could just be a misidentification, an escaped pet or test animal, or even an outright hoax. People get fleeting glimpses of strange animals, and can easily mistake it for something else. As mentioned in the article, there’s other big wildlife in the area, including bears, coyotes, and bobcats. Alternately, maybe it is just a hoax, dreamed up by someone who has been in quarantine for a bit too long. So was this really a monkey on the loose? What do you think is roaming the town?

Monkey on the Loose in Massachusetts
Episode 18