For my final Halloween Watchlist, I decided to recommend a few of my personal favorites for Halloween viewing. Everything I’ve mentioned in my previous lists are highly recommended, but for me, the following list are films I must watch every year, as per my own tradition. They are just movies that I love, and that really get me in the Halloween mood. A few are kinda “duh” suggestions, but hopefully there’s one or two on here that are still undiscovered gems for you. I was hoping to have this post done a few days ago, but between the blog being hacked (all fixed now), and a little game called “Red Dead Redemption 2” being released, I’ve been otherwise occupied… 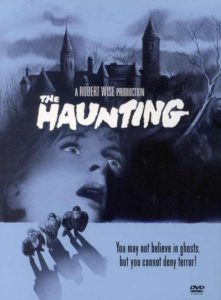 You may have heard some buzz about a little show on Netflix right now called The Haunting of Hill House. It’s based on the 1959 novel of the same name by Shirley Jackson, but with some creative liberties and a modern spin. The original story has been adapted a few times for the big screen, with a 1999 version starring Liam Neeson, Catherine Zeta-Jones, Owen Wilson, and Lili Taylor, as well as a loose adaptation by Stephen King, the TV miniseries Rose Red. Both of those versions were fairly terrible. Rose Red was slow, boring, self-important, and derivative of some of King’s other works. The 1999 version, despite its star power (I mean let’s face it, Liam Neeson is good in anything), failed to deliver any real scares, focusing more on bad CGI rather than good writing to thrill viewers. I haven’t seen the Netflix version yet, and I’ve heard some mixed things about it. But it you want a truly scary, old-fashioned ghost story to watch this Halloween, check out “The Haunting” from 1963. Parapsychologist Dr. John Markway invites psychic Theodora and poltergeist experiencer Eleanor to help him investigate Hill House, an allegedly haunted mansion in Massachusetts with a dark past. Luke Sanderson, current heir to the home, accompanies the threesome for their stay while they investigate. And of course, before long, spooky things start happening. Despite being made in 1963, the film is purposely shot in black & white, which adds an element of gothic moodiness and makes this truly feel like an old time ghost story. The special effects are mainly practical and subtle. Like most good horror films, the viewer’s imagination is left to fill in most of the blanks, and it works to terrifying effect in this film. My favorite “haunted house” film of all time, introduced to me as a kid by my dad, and a great all around horror movie, especially this time of year. Quintessential Halloween viewing for me. 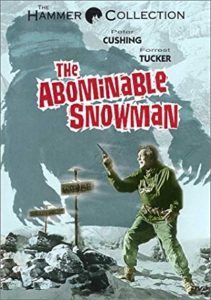 Any true horror fan knows of Hammer Films. Dracula, the Mummy, Frankenstein, Peter Cushing as Van Helsing, Christopher Lee as Dracula. Makers of truly classic horror. But one of their lesser known films happens to be my favorite Bigfoot/Yeti horror movie of all time. Peter Cushing plays Dr. John Rollason, a humble, soft-spoken botanist who is on an expedition in the Himalayas. Rollason, his wife Helen, and assistant Peter Fox are guests of the Lama at the Rong-buk monastery, and seem to be enjoying their expedition, remote as it is. But it soon becomes clear that botany is not Rollason’s main reason for exploring the Himalayas. He is, much to the chagrin of his wife, meeting up with a small expedition led by Dr. Tom Friend (expertly played by Forest Tucker of F-Troop fame), an American adventurer with a shady past who is in search of the legendary Yeti. Friend is (not too) loosely based on Tom Slick, the oil tycoon who famously funded and led real-life expeditions in search of the Abominable Snowman. Friend and his two cohorts agree to take Rollason along with them in search of the Yeti. And as luck would have it, they find and kill one. And that’s when things really start getting bad for the expedition. Much like “The Haunting,” most of the scares here come from what you don’t see. Distant howls, heavy footsteps, and only the most fleeting glimpses of the Yeti will keep you on the edge of your seat. The film has a nice, slow build, but is never boring, and centering on a small team of explorers way up in the snowy Himalayas adds to the claustrophobic fear of being trapped in the mountains with a large, bipedal creature. The ending is surprising, more quiet and introspective, definitely not a hallmark of most other horror films from the time. Or even today. Aside from Halloween, I love watching this movie on nights where we have big snowstorms, after shoveling, with a nice cup of hot chocolate. Another tradition my dad got me into, after getting me into this movie as well.

Ok, here’s the “duh” suggestion I referred to earlier. And I’m not talking about any of the sequels, or the remakes, or the reboots, just the original Halloween by John Carpenter. I’m not really big on slasher flicks, and all that blood and gore really does nothing whatsoever to scare me. It can be entertaining, but it’s not really scary. Personally, I like my horror more subtle and cerebral. But of all the slasher flicks out there, this one, to me anyway, is the masterpiece. The plot is paper thin: psychotic Michael Myers, being held in a sanitarium for killing his sister years earlier on Halloween night, breaks out and terrorizes the quiet little town of Haddonfield, Illinois. Again, on Halloween night. He stalks high school student Laurie Strode (Jamie Lee Curtis in her breakout role) and her teenage friends, while Dr. Sam Loomis (the always exceptional Donald Pleasance) frantically tries to capture him and bring him back to the hospital. Teens having sex are killed in brutal fashion, Laurie saves the day, and Loomis laments that Michael is an unstoppable killing machine. And there’s even some well-timed humor strewn about. And you know what? It works. It all works perfectly. The film is pure Halloween fun: scary, funny, tense, atmospheric, everything you could want in a Halloween movie. I mean, it takes place on Halloween. In the perfect little town in the autumn, rife with changing leaves, kids going Trick or Treating, people wearing sweaters. The musical score alone is iconic, composed by Carpenter himself. And what can be scarier than a homicidal maniac wearing a William Shatner mask? This is the template for every teen slasher movie that followed, and it’s by far the best one.

I know, I know. This is as divisive as it gets when it comes to horror movies, but I don’t care. This is the ultimate found footage horror movie, and one of the best horror movies ever made. Simple premise: high school student Heather is making a documentary for a school project on the legend of the Blair Witch. She takes her friend Josh, and his friend Mike, along with her to help her make her documentary. Of course they get lost in the woods, and soon enough, something is stalking them. The three start losing sleep, as well as confidence, as things get increasingly spooky each night they are out lost in the woods, and they all start descending into panic, climaxing with a fervent, bizarre, and unsettling end. This film is iconic, and launched the found footage genre; it was so well-produced and brilliantly paired with a viral marketing campaign that people actually thought that these three kids really died. Yes, people thought this film was real. And while some audience members disliked that no Blair Witch (or whatever was stalking them) was ever seen, I felt it was a bold choice, and one that elevated the film from run of the mill to truly frightening. The performances by the actors were stunningly convincing, and forcing the viewer to imagine what the “filmmakers” were seeing and experiencing just makes this a more visceral experience. This is not escapism. This is not a popcorn movie where you kinda root for the deranged murderer to kill the annoying teens. The film presents these as real kids, in real danger, and there’s never really any time here you are brought out of that moment, out of believing that. Personally, I love that it takes place in October, and the crunch of the autumn leaves as the kids try to escape their imminent doom is a constant reminder of the Halloween-ness of this movie. If you’ve never seen it, please give it a shot.