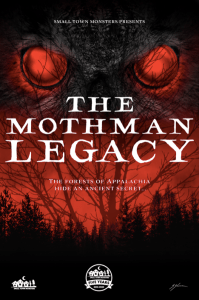 One of the qualities that I really dig about the Small Town Monsters crew and their documentaries (and honestly, there’s a lot to dig) is that they’re not afraid to do things differently. As a compliment, that may sound a bit cliché, and perhaps not particularly worthy of mentioning, especially in this age of celebrating diversity. Yet when you have a successful formula, doing something different can be extremely risky, because we also live in the age of instant internet outrage, of people loving you one moment and despising you the next, simply because you went against the established grain. But Small Town Monsters has successfully mixed things up before, most notably with their 2019 offering, “Momo: The Missouri Monster.” A stark contrast to their previous films, “Momo” was presented in “mockumentary” style, telling the story of the Missouri Bigfoot with faux documentary footage and cheesy 1970s-style recreations. It worked in that instance, as the tales of Momo are specious at best, and although “The Mothman Legacy” is not nearly as dramatic a stylistic departure, it’s still something different – but something different that works.

This is not the first time the Small Town Monsters crew has tackled the legend of Mothman. In 2017, STM released “The Mothman of Point Pleasant,” an in-depth look into the unsettling events of 1966 and 1967 that spawned the entire Mothman legend and all of the spooky phenomena surrounding it – UFOs, the Men in Black, the enigmatic Indrid Cold, and the collapse of the Silver Bridge, which seemingly ended the sightings of the mysterious Mothman. That film was more standard STM fare, mainly covering the original Mothman flap, with interviews and quotes from the witnesses and other familiar names and faces related to Mothman- John Keel, Mary Hyre, Gray Barker, Loren Coleman, Jeff Wamsley, etc. This film takes a slightly different approach, focusing on a very different aspect of the story.

“The Mothman Legacy” is the first sequel from the Small Town Monsters team, as every other doc in their catalog has been more of a stand-alone documentary on a specific monster (or a specific small town experiencing their specific version of the same type of monster, like Bigfoot). But “The Mothman Legacy” is more than just a sequel. On the one hand, it is in many ways a direct follow up to the first film, as it covers newer accounts of encounters with Mothman in the time after the well-known events of ’66 and ’67. The popular narrative is that once the Silver Bridge tragedy occurred, all sightings of Mothman in Point Pleasant, West Virginia, came to a halt. That is not really the case, as the creature continued to be seen, though without as much of the previous fanfare. And a selection of those stories are included here, some in detail with recreations, and others only mentioned in passing or noted on a timeline graphic. But more importantly, “The Mothman Legacy” sets out to explore exactly what the title suggests: the ongoing legacy of Mothman, and its continuing impact on the town of Point Pleasant and the people who live there. This is a film documenting the passage of Mothman from obscure, small town cryptid into the larger mythos of cryptozoological creatures. Mothman is modern-day folklore, a creature that had been seen before the famous flap of 1966-67, and one that has been seen many times since – and continues to be seen to this day.

Because of this divergent approach, viewers need to manage their expectations with this film. Being a sequel, there are some prerequisites that one must realize before watching. It doesn’t ignore the original flap from the ’60s, but it doesn’t go into too much detail about it, either. Anyone unfamiliar with the Mothman legend might be a little lost here, but that’s what “The Mothman of Point Pleasant” is for. As I said, “The Mothman Legacy” focuses more on the people connected to Mothman, more than Mothman itself. It touches on some of the more modern encounters, but sadly doesn’t include as many as most viewers may be expecting. There are some really interesting accounts that are only mentioned in narration, or alluded to on the aforementioned timeline graphic, and I think it would have been fascinating to have some of those tales explored more deeply. And like all of the STM documentaries, there’s no agenda here to convert viewers into believers. The audience is left to make up their own mind: was Mothman really an unknown creature? An interdimensional being? Perhaps misidentification of a sandhill crane or large owl? Or were most of the sightings just fear-based hallucinations and mass hysteria? All of those options are presented here, just one of the many great things that Small Town Monsters does that helps them stand out as the leader in paranormal documentaries

The film itself is gorgeous, and easily the best-looking STM flick to date. Which is saying a lot, as the more recent entries have all had a “big budget” feel to them. The cinematography and editing are top notch, with stunning establishing shots of Point Pleasant and other surrounding areas associated with Mothman sightings. Zachary Palmisano is to really be commended here – the colors, the composition, all just spectacular. As always, Brandon Dalo’s musical score is on-point: eerie, subtle, and strangely beautiful. The special effects have been given a nice upgrade, though I do miss the old drawings and sketches from earlier docs the team has done. And Lyle Blackburn is back again on narration duties, his dulcet tones now a staple of STM productions, comfortable and welcoming. The on-camera interviews with witnesses and Mothman researchers read a bit too dark to my eyes – perhaps a stylistic choice, perhaps just my TV – but it made it difficult to see their faces at times. But once again, Seth Breedlove and his entire team have really shown that passion and dedication to your art will always yield the best results.

Part sequel, part addendum, and part stand-alone film, “The Mothman Legacy” covers a lot of ground, yet ultimately solidifies Mothman’s status as a legendary cryptid. Definitely a must for your Halloween watch list!

“The Mothman Legacy” is available now for preorder on DVD and Blu-tray, and will be released on October 20th. Watch the trailer below!