Last year, I did a series of posts showcasing some of my favorite Halloween fare. I tried to go with some more unconventional picks than most Halloween movie watchlists, and my first entry focused on funny horror movies. Now, I’m not talking flicks that have a touch of humor, like “Scream,” or even parodies like “Scary Movie.” I’m talking about movies so bad, that they are unintentionally funny. Or, some people who are much wittier than most of us make them funny. I liked this list a lot, and haven’t really found anything to supplant these reigning champions of “so bad they’re good” flicks, so I’m presenting them again, with a few minor additions and updates. But overall, it’s the same basic list from last year.

This list is admittedly skewed towards a certain genre, but stick with me here, and you won’t be sorry. I promise. 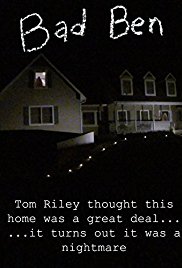 I am a sucker for a good found footage movie. And apparently for really bad found footage movies, too. There are lots of great ones out there, like the “The Blair Witch Project” and “Grave Encounters,” and there are plenty of terrible entries. But none of the awful ones can touch the creepy goof-fest that is “Bad Ben.” Produced solely by writer and star Nigel Bach, the film is shot entirely on an iPhone and a few security cameras, in Bach’s real-life home, for an estimated budget of about $300. How awesome is that? Bach stars as Tom Riley, a poor schlub who buys a home in southern New Jersey, near the Pine Barrens, at a sheriff’s sale. He’s never been inside the house, and decides to document his moving-in process. Luckily for us, there’s also security cameras already installed in the home, and they help him to document all of the weird things that start happening as he settles in. He encounters evidence of past murders in the home, Satanic rituals in the attic, ghosts, demons, and even the Jersey Devil, but nothing is as terrifying as seeing middle-aged Tom Riley running around in his underwear. Lots of unintentional laughs here, but the movie is oddly compelling, and you will find yourself rooting for Tom despite the fact that he’s essentially a cranky loser. There are also now a number of sequels (with a seventh film on the way), not as good as the original, but all are definitely worth checking out: “Steelmanville Road” is a prequel and explores the deaths in the home prior to Tom buying it; “Badder Ben: The Final Chapter” is awesomely meta and has Tom returning to the home with some paranormal investigators who liked his original film (and spoilers, is NOT the final chapter); and “Bad Ben: The Mandela Effect” is a collection of retellings of the original film, in different universes. More recently, Bach released “The Crescent Moon Clown” and “Bad Ben: The Way In.” Briefly, “The Crescent Moon Clown” is about a young woman who buys Tom Riley’s home and is stalked by a…well, a goofily psychotic clown that’s the second cousin of the Jersey Devil or some convoluted thing. “The Way In” explores Tom’s basement in more detail, and focuses on his discovery of a little doorway hidden behind his furnace that he somehow missed in the previous 5 movies. The door is apparently a portal to Hell, or South Jersey. Same difference I guess. You should also check our “The Making of the Bad Ben Trilogy.” It’s a fun, 30-minute behind the scenes documentary, wherein Bach takes us through how he filmed the first three movies, accomplished the special effects, and shows that in reality, he’s a really good guy who can laugh at himself for the awkwardly hilarious horror movie universe he’s created. Good stuff all around.

For those not in the know, Mystery Science Theater 3000 was a show that ran on Comedy Central (and later on the Sci-Fi Channel) from 1989 to 1996. The basic premise: the show’s host (first played by creator Joel Hodgson, and later by head writer Mike Nelson) is trapped in space by mad scientists (aka “The Mads”), and forced to watch bad movies, with the help of his robot friends Crow T. Robot and Tom Servo. The only way they can get through the movies is to crack jokes, or “riff,” on the films to make them easier to watch. The results are hilarious, and the show became a cult classic, even garnering a recent revival with new episodes on Netflix. My favorite episode from the Mike years mixes horror with cryptozoology, in the comically awful “Boggy Creek II: And the Legend Continues.” Seemingly a sequel to the cult classic “The Legend of Boggy Creek,” it’s technically the third Boggy Creek movie, and not really a sequel. Whereas the original film was a documentary with reenactments of actual events, this film is a fictionalized tale, with director Charles B. Pierce playing University of Arkansas professor Brian C. Lockhart, who goes looking for the Boggy Creek creature with three of his students. Lockhart is grumpy and cantankerous, his students are dim-witted and shallow, and together they get into all sorts of wacky adventures with hillbillies and outhouses as they search for Bigfoot in the swamps of southern Arkansas. Mike and the bots make this movie not only watchable, but enjoyable. The jokes are fast, furious, and funny as hell. If your sides don’t hurt by the time this movie is over, you and I can’t be friends. 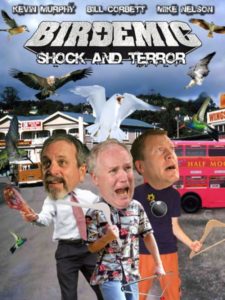 Years after MST3K had ended its run, Mike Nelson formed Rifftrax, a website that provided his solo commentary available as an audio file that was able to be downloaded and synced to a user’s home copy of a movie. A few years later, MST3K alum Bill Corbett (Crow T. Robot) and Kevin Murphy (Tom Servo) joined Rifftrax, and the trio started releasing fully downloadable movies and shorts with their riffs included, just like Mystery Science Theater 3000. They also started doing live shows, which were simulcast to theaters nationwide. One of their best live events was “Birdemic,” a horrendously bad ripoff Alfred Hitchcock’s “The Birds.” And by horrendously bad, I mean it’s just amazing that this film ever saw the light of day. Many people would say “Plan 9 from Outer Space” is the worst movie ever made, but it’s a masterpiece compared to this movie. Plagued by bad editing, continuity errors, terrible dialogue, wooden acting, botched lines, audio that dips in and out, a nonsensical story, and a holier-than-thou message about saving the environment presented with the subtlety of a “Three Stooges” bit, the film is a complete and utter dumpster fire. But all of that is nothing compared to the truly laughable special effects. And please note, nothing I can say here can adequately convey the ineptitude of the effects in this film. And we are not talking about fantastical creatures from the depths of someone’s imagination that they had difficulty getting “right.” I’m talking about birds. Normal, every day, run of the mill birds. Not giant birds, not mutant birds. Just birds. Your jaw will drop. A 5-year old and a free iPhone app could do better. The Rifftrax guys are master riffers, so the jokes are all perfect, and the live reactions just make it all the funnier. As a bonus, there’s a short “educational” film up first, called “Norman Checks In,” which is about yet another down on his luck schlub that has nothing go right for him as he spends a night at a hotel. Not sure what’s so educational about that, but it’s comedy gold.

“Your film today is called ‘Pod People.’ It has nothing to do with pods, it has nothing to do with people, it has everything to do with hurting.” And this is how we are introduced to my favorite Joel episode of MST3K. A French-Spanish film, originally titled “Los nuevos extraterrestres” (or “The New Extraterrestrials”), it was originally intended as a horror film about an evil alien with an insatiable bloodlust. But with the popularity of “E.T.” coming out the year prior, the film was modified to be more family-friendly, and instead became a story about a young boy who befriends an alien…who has an evil mother with an insatiable bloodlust. Three unlikable poachers see a UFO or meteor crash in the woods and go to investigate, and one of them smashes an alien egg in a nearby cave, killing the creature inside. The baby alien’s mother kills the poacher, and the other two flee, hoping for revenge at a later time. Meanwhile, young Tommy has taken one of the other extraterrestrial eggs home, and it hatches in his room, sprouting a little ALF-like alien that he names Trumpy. More meanwhile, in Movie C, a completely unlikable rock band decides to go camping, and inevitably, the entire despicable cast – poachers, Tommy and his family, and the rock band – all cross paths and have to deal with Trumpy’s murderous mother. Yes, it’s as good as it sounds. The MST3K crew make it entertaining, with side-splitting jokes and an amazing musical number parodying the rock band’s awful performance. Classic MST3K and cheesy horror all in one.

For my money, the true successor to MST3K is Incognito Cinema Warriors XP. Created in 2008 by Rikk Wolf, ICWXP is a loving homage to MST3K, and follows the same basic format: Rikk is stranded in a movie theater during a zombie apocalypse, and makes fun of bad movies with his robot pals Topsy Bot 5000, Flux Namtari, and Johnny Cylon. Even Mike Nelson of MST3K/Rifftrax has praised their riffing skills. The show is truer to the original MST3K, and has that more low-budget, off the cuff feel, and it works really well. Silhouettes and all. And honestly, I wish they had been given the reins to the MST3K reboot (which sadly, is honestly pretty “meh” at best). And while they may have been inspired by MST3K, their humor is a little more adult-oriented; as such, they are more free in what they can say, as well as how and what they riff. Rikk is a great guy, genuinely nice and down to earth, and the whole crew love their fanbase just as much as they love their craft. They interact with their fans on Facebook as easily and as regularly as you would chat with a longtime friend. Anyways, more recently they have branched out to riff shorts, trailers, and video games (under new branding as Robot Co-Op and NoBot Co-Op), and my recommendations for this list are three of my favorite video game riffs: Resident  Evil, Resident Evil 2, and Resident Evil VII. These survival-horror zombie games are perfect for Halloween, rife with jump scares, blood, gore, and creepy music. Plus the source material is just awkward and dated enough now for a good-natured ribbing. Er, um, riffing. And as a bonus, most of their stuff can be found on YouTube, so be sure to like, comment, subscribe! Like, comment, subscribe!