Monsters of Massachusetts by Loren Coleman

Massachusetts is probably not the first place people think of when they think about monsters. Well, aside from the big green variety if you’re a sports fan, maybe. Mention Bigfoot to anyone, and their first thought is probably the sprawling wilderness of the Pacific Northwest. The idea of a lake monster elicits imagery of a foggy Scottish loch. And Massachusetts is the last place people would expect to find giant panthers and other large cats. But as New England’s resident cryptozoologist proves in his book Monsters of Massachusetts, some of the most famous monsters of all time may inhabit the Commonwealth.

The book opens with what is, in my opinion, one of the most fascinating cryptid tales out there, the Dover Demon, which was first investigated by Loren Coleman himself. For those not in the know, the Dover Demon was a highly unusual creature that appeared in Dover, Massachusetts in April of 1977. Four teens in three separate encounters all spotted what would later be dubbed the Dover Demon. Bill Bartlett, John Baxter, Abby Brabham, and Will Taintor all spotted the creature in the late hours of April 21st and into the early hours of April 22nd. They all described what they saw similarly: a small, thin, humanoid creature that had pinkish or beige skin, a large bulbous head, no mouth or nose, long spindly fingers and feet, and glowing orange eyes (only Abby Brabham differed in this, staying that the eyes “…were green. I don’t care what the boys said.”).

Superficially, this sounds almost like a stereotypical “gray alien,” but there are some differences. Most grays are described as having black, almond-shaped eyes, not glowing round ones. Also, the witnesses described the creature as “scurrying” and running away from them, which is not really consistent with stories of stoic gray aliens who seemingly have the power to paralyze human beings and are often quite in control of the situation. All sorts of explanations were given as to what the creature could have been, from an escaped monkey to a baby moose, but none really fit in with the timing, location, or descriptions. Coleman does a great job of presenting the initial witness testimonies, documenting the original investigation (which he himself led), and debunking some of the sillier explanations for what this creature might have been. The fact that it was seen by three distinct groups of people, but only on that one night in Dover, makes this one of my favorite cryptid mysteries ever. And this is probably one of the best, most complete accounts you will read on the subject.

From there it’s on to some mysterious sea creatures, namely a giant squid and a sea serpent. The giant squid is slowly making it’s way out of the realm of cryptozoology and folklore and into mainstream zoology, but it’s still in that grey area for most people. And one of the many explanations for sea serpents was, ironically, giant squid tentacles, and I tend to agree along those lines, but that’s just me. I have never been big on sea serpents or lake monsters, and these chapters are shorter, so it suited me fine. Just a weird bias I have against aquatic cryptids, I guess.

Up next it’s the Bridgewater Triangle and Hockomock swamp, which are home to UFOs, “birdmen,” thunderbirds, spook lights, and all sorts of weird creatures. Other chapters deal with Bigfoot and other hairy humanoids, as well as their smaller humanoid cousins, Puckwudgies, little folk of the woods that also trace their mythology back to indigenous legends. And what Loren Coleman book would be complete without chapters on out of place animals, like alligators, black panthers, fish falling from the sky, and extinct hens? They are all in here, and these are the creatures that really fascinate me. Not so much the fantastical beasts of yesteryear, but rather animals that we know to exist, or existed in the not-too-distant past, but are still showing up, in places they shouldn’t be, or even just seemingly falling from the sky.

And like all Loren Coleman books, there are a few parting gifts before it truly ends. A short chapter on witnesses, and why they may not always be consistent or reliable (and why that may not always be their fault), is a great read for any investigator, armchair or otherwise. And the Appendix is a nice, concise listing of the creatures in the book and where to find them (or at least, replicas or statues of them).

The Good: It’s a Loren Coleman book, and the meat of the book details an investigation into one of the weirdest events in American cryptozoology, and he was the lead investigator. What more could you ask for? Oh, yeah, other cryptids. Well, you get those too. Anything weird, unexplained or bizarre from Massachusetts is in this little book. 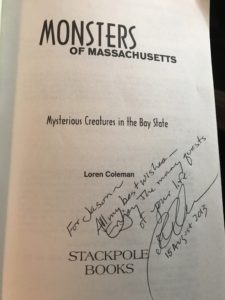 The Bad: Again, as with all Stackpole books I’ve reviewed, I have an issue with the lack of photos in the book. Again, I get why they don’t do it, but I think being able to see the actual sketches of the Dover Demon (the mean-looking muscular guy on the cover is a far cry from what the eyewitnesses actually described) or Hockomock Swamp would have been awesome, especially since I love Massachusetts and the lands there.

The Ugly: Nothing else to complain about in this book. Mr. Coleman even autographed it for me, at the request of my now-wife Laura, when she and her friend visited Loren Coleman in his International Cryptozoology Museum in Maine, back in 2013 (yeah…I’ve taken way too long to review this gem).